Yesterday when I took my dog for a walk, I decided not to bring my camera. I figured I’ve been taking enough pictures lately and I should just focus on the walk. It never fails though. Whenever I don’t bring my camera, I end up wishing I did. Within five minutes I saw something I wanted to photograph, so I ran back to my house to grab my camera. 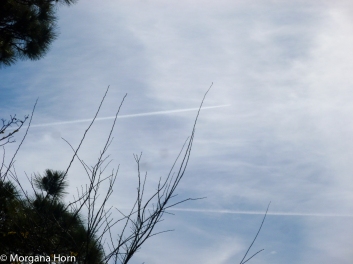 A whole bunch of planes were high up in the sky filling the blue expanse with whatever that is . . . they resemble clouds, but they’re definitely NOT clouds. After the wind moves these “clouds” all around, they sometimes create interesting formations.

When I looked up to take the picture I noticed a rainbow. I thought it looked pretty cool with the sun shining behind the tree so I went picture crazy.

I love the simplicity of this last picture. I finally quit shooting the “clouds” and focused on the walk like I had originally planned. Sunny, my dog, was probably thinking FINALLY!

After I named this blog post, I was reminded of the surrealist painter Rene Magritte, who painted, “The Treachery of Images.” It’s not a pipe but it’s actually a painting of a pipe. He was going for a play on words and images.

My pictures are not of clouds, but of some weird substance masquerading as clouds. How do you say, “These are not clouds,” in French?:

One response to “These Are Not Clouds”

Are you a beginner artist and not quite sure why your art doesn't look right? Basically, 5 minutes of feedback for $5. I'll take a quick look and provide some quick feedback. For details email: morgana_horn@hotmail.com

Day 5 of No Electricity or Running Water - nice to see the sun again
You Know that Movie Krampus . . . I feel like I'm trapped in a scary winter snow globe
Nooo, this isn't Alaska - It's Nacogdoches TEXAS! I'll be glad when my power comes back on and my frozen toilet water melts
68 Camaro Covered in Snow - I don't think this car has ever been in that much snow
Loading Comments...
Comment
×
%d bloggers like this: